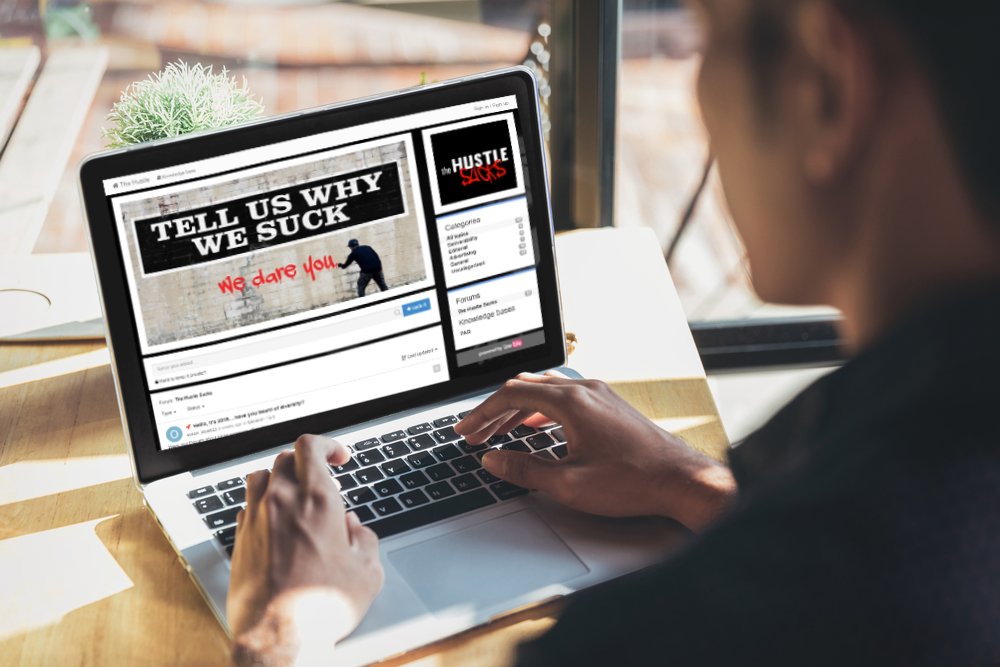 What’s The Hustle? No, we’re not talking about the dance, but rather the daily e-newsletter that’s taken readers everywhere by storm thanks to their conversational, relatable and funny source of tech and business news. They have a current subscriber base of over 1.1 million, a mission to “educate, inspire and entertain”, and, every now and then, they suck.

Before you get your back up and accuse us of picking on these guys, let us explain. In December, The Hustle launched The Hustle Sucks, an online feedback forum designed to give disgruntled readers a place to vent. Why? As Adam Ryan, VP of Media at The Hustle, notes, “Having an isolated page to organize feedback and have our audience interact about certain topics is an extremely efficient way to collect feedback.”

When your brand hinges on being digitally savvy, witty, relatable, clever and edgy all at once, you should never shy away from consumer feedback—positive or negative. But you should think outside the box in regards to how you obtain this feedback. And that’s exactly what The Hustle did by building TheHustle.sucks.

With a whopping 40% open rate on their daily e-newsletter, The Hustle clearly has a loyal reader base—and a number of them have strong opinions about what they like and what they don’t. Being a digital-only platform, the team became overwhelmed by the number of emails they were receiving, both good and bad. They understand that it’s important to deal with criticism head on; however, the sheer volume of emails received—not to mention additional messages on various social media channels—made it hard for them to respond to everyone.

Knowing that they couldn’t afford to turn a blind eye to what their customers were saying, The Hustle decided to take action.

Stating that your own product sucks is a bold move, but when done in a tongue-in-cheek way with a dedicated domain, it can be ingenious not insane. So, when The Hustle decided to build out a dedicated feedback forum, they chose .SUCKS. As Ryan explains, feedback isn’t always straightforward. “It’s funny to see one person say ‘I hate X’ and then another person say ‘I love X’, [which] is super common when you start to build a large audience.”

You’ll never satisfy everyone on the internet, and the team at The Hustle knows that. On TheHustle.Sucks, users can even like or dislike other comments, categorize their critique (editorial, advertising, etc.) and respond to other people’s criticisms. It’s a place where conversations flourish, rather than fall on deaf ears.

Launched in early December 2018, The Hustle is already seeing a positive response from their community. After The Hustle CEO Sam Parr tweeted, “TELL US WHY WE SUCK”, users were quick to commend the effort.

In its first month, The Hustle Sucks received over 100 comments across eight categories, with as many as 24 upvotes on a single critique. For an e-newsletter with such high daily engagement, this level of user interaction may not come as a surprise, but the feedback provided in this forum is already helping The Hustle prioritize the changes its readers want most.

Genuinity is attractive. Self-awareness is admirable. Humbleness is approachable. Rather than letting naysayers talk shit about their brand elsewhere on the web, The Hustle gives them a constructive platform.

If TheHustle.Sucks, should you? Customers appreciate feeling heard and respect corporations admitting that they are not perfect. A dedicated forum for feedback and two-way communication with consumers shows your audience that you’re listening and trying to improve. It’s working for The Hustle, and it can work for your brand, too.